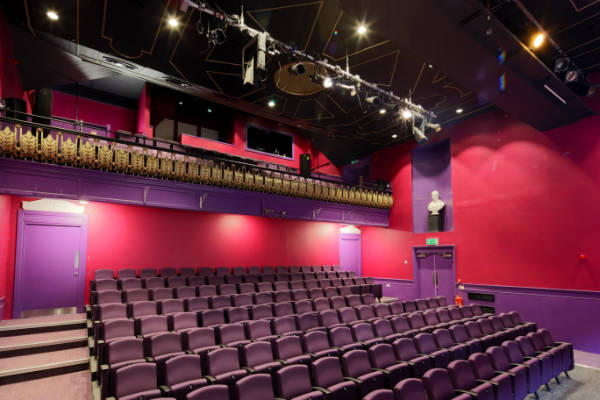 The oldest theatre in Scotland, the Theatre Royal is in the heart of Dumfries and first opened its doors in 1792. It has strong associations with the renowned Scottish poet Robert Burns, who wrote several pieces specifically for its stage.

The Theatre saw multiple changes of ownership during the first half the of 20th Century, before being bought by the Guild of Players in 1959.

The Guild managed to secure support from new sources and instead of planning on building new facilities upwards, they looked towards expanding outwards. Adjacent buildings were purchased, and renovation work began in 2014, completed by the end of 2015. The newly refurbished building includes several new spaces while maintaining many of the historic features, ushering Scotland’s oldest theatre into the 21st Century.

Attend one of the touring productions presented throughout the year, which includes live music, stand-up comedy and theatrical dramas. The Guild of Players presents a regular season of four shows, as well as a family-friendly Christmas pantomime.

Grab a drink at the bar before the show or enjoy a meal from the customised theatre menus at nearby restaurants. Want to get hands-on at the theatre? You can participate in one of the workshops or join our group of fantastic volunteers and help build sets and design costumes.

The Theatre Royal is located on the edge of Dumfries’ main shopping district, a short walk from the Dumfries railway station. It’s a 1.5-hour train journey to Dumfries from Glasgow or just under one hour’s drive from Carlisle Airport.