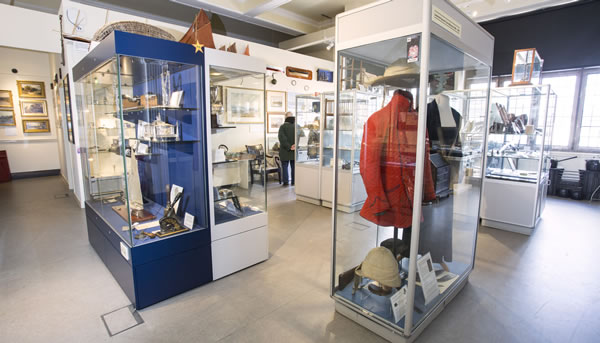 This family friendly museum houses a permanent exhibition on the history of Annan and the surrounding area. A fascinating journey through time takes visitors from the prehistoric period up to the era of nuclear fission. Displays include costume, First World War memorabilia, town regalia and a remarkable collection of paintings depicting Annan and the Solway shore. Look out for a 4000 year old Bronze Age burial urn, mummified baby crocodiles and the 110 year old piece of chocolate! The museum also hosts a lively programme of special exhibitions, events and family activities throughout the season, provides visitor information and sells unusual and nostalgic toys, gifts and books on local history. 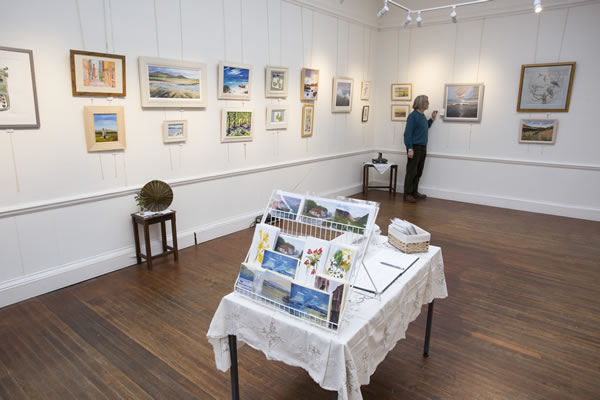 Castle Douglas Art Gallery first opened in 1938 having been gifted to the town by Mrs Ethel Bristowe, a talented artist in her own right. The gallery was upgraded in 1996 with lottery funding through the Scottish Arts Council, and now forms an excellent venue for contemporary art and craft exhibitions. The programme runs from March to Christmas showcasing both group and individual works from across the region. 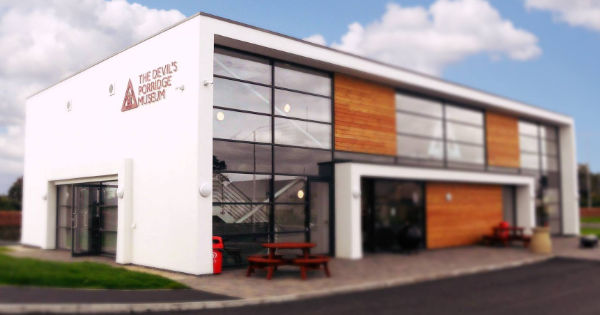 Discover the remarkable story of the Greatest Munitions Factory on Earth and the extraordinary lives of the Munitions Girls who helped to win the war.

The Devil’s Porridge Museum commemorates HM Factory Gretna, the largest munitions factory in the world during the First World War and explores the stories of the Solway Military Coast during the Second World War and beyond. The museum uses artefacts, information panels, film and audio, photographs and oral histories to bring the fascinating history of this Border area to life! 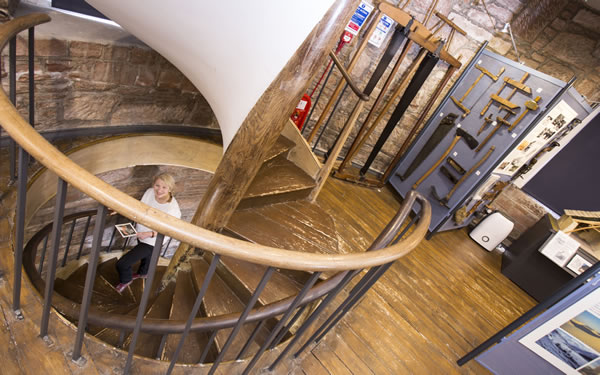 A treasure house of history in Dumfries and Galloway, Dumfries Museum tells the story of the land and people of the region. Look out for fossil footprints left by prehistoric animals, the wildlife of the Solway, tools and weapons of our earliest people, stone carvings by Scotland’s first Christians and the everyday things of the Victorian farm, workshop and home. The museum also hosts a lively programme of special exhibitions, events and family activities throughout the year and has a shop selling unusual and nostalgic toys, gemstones, gifts and books.

Explore art and craft at Gracefield Arts Centre. A packed programme of collection exhibitions and contemporary exhibitions featuring regional, national and international artists and craft makers, along with art and craft workshops for adults, children and families ensures a lively atmosphere. The arts centre also has a craft shop, café and an active print studio. Gracefield Arts Centre is home to a collection of over 600 paintings and drawings by Scottish artists, most with links to Dumfries and Galloway. 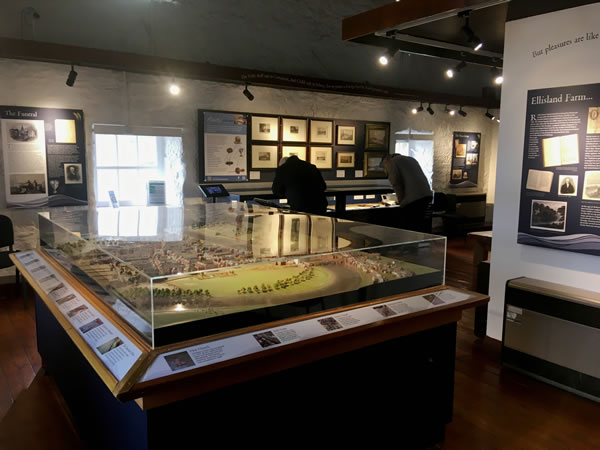 Situated in the town’s eighteenth century watermill on the west bank of the River Nith, the Robert Burns Centre tells the story of Robert Burns’ last years spent in the bustling streets and lively atmosphere of Dumfries in the late eighteenth century. The exhibition is illuminated by many original manuscripts and belongings of the poet. There is a fascinating scale model of Dumfries in the 1790s, museum trails, fun activities to help you explore Dumfries and Galloway’s Burns connections. Browse around the shop with its selection of Scottish books, gifts and keepsakes. In the evenings the centre is Scotland’s smallest film theatre, showing the best in contemporary and world cinema. 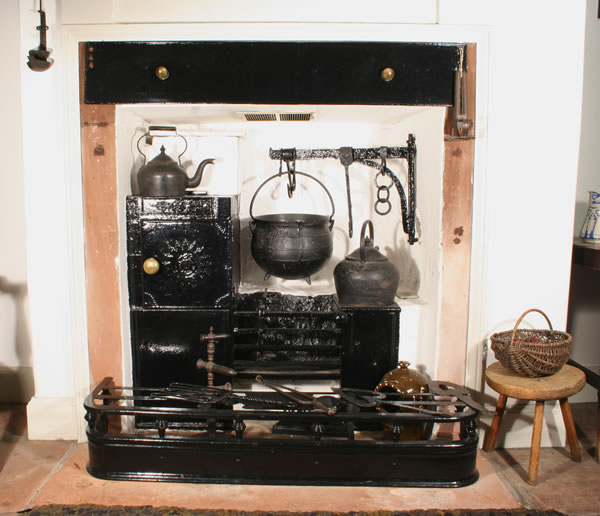 It was in this simple sandstone house in a quiet Dumfries street that Robert Burns, Scotland’s national poet, spent the last years of his brilliant life. He died here in 1796 at the age of just thirty-seven. The house gives us a picture of how the poet and his family lived in the late eighteenth century and is now a place of pilgrimage for Burns enthusiasts from around the world. 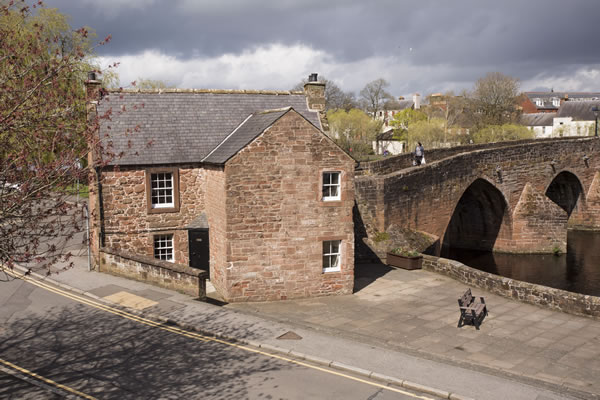 Cross the fifteenth century Devorgilla Bridge to the Old Bridge House. Built in 1660 into the sandstone of the bridge itself, Dumfries’ oldest house is now a museum of everyday life in the town. You can see the family kitchen, nursery and bedroom of a Victorian home, and pay a visit to an early dentist’s surgery! Interpretive panels and museum trails tell the story of a house overlooking the river Nith. 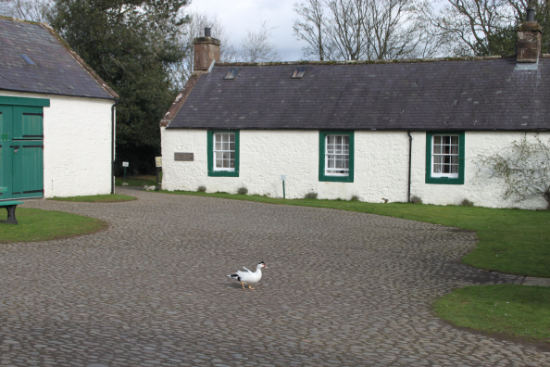 At Ellisland we celebrate and share the extraordinary story of the rural home built by Scottish National Bard Robert Burns; a story of hospitality, of an inspirational landscape and of creative talent. Ellisland is an important part of the Robert Burns story, being the only house that Burns built for himself and the site which inspired him to write some of his most famous poems. Today you can discover the poet through the museum’s collections, visiting the heart of his farmhouse home, the room where internationally renowned writing was created and the landscape which was his inspiration. 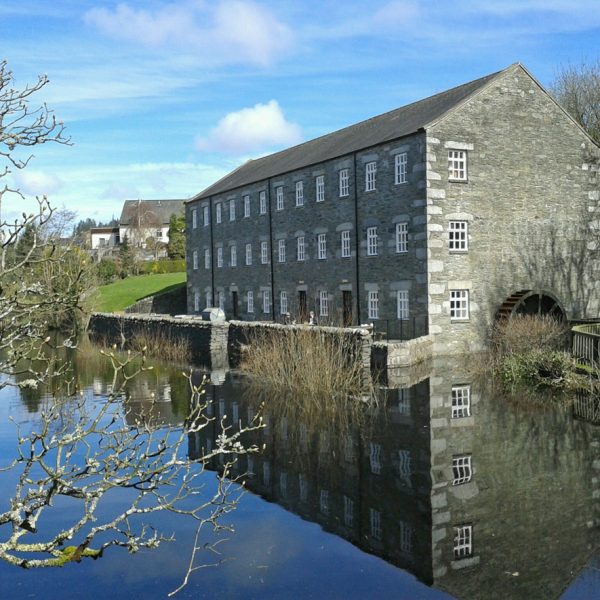 The Mill on the Fleet, Gatehouse of Fleet

The Mill on the Fleet is a restored 18th century cotton mill on the bank of the River Fleet in Gatehouse of Fleet.  Now an exhibition centre The Mill on The Fleet is spread over three floors and houses core displays about the development of the town of Gatehouse and the natural history of the Fleet Valley.  There is also an annual programme of temporary exhibitions.  On the ground floor the regional arts collective PA Pop Up representing artists and craft-makers from around the region has an outlet for their varied work.  On the top floor is a popular second-hand bookshop.

The café offers a range of home-cooked fare – soups, paninis, salads, sweets and a selection of cakes and bakes.  On a fine day the riverside terrace is the perfect place to relax.  The Mill on The Fleet also welcomes well behaved dogs! 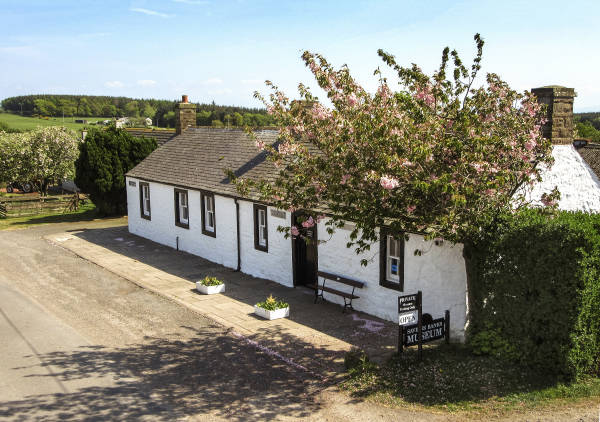 The birthplace of the world savings bank movement.

Visit this 200-year-old cottage and take a step back in time... Our Museum is located in the very room in which Henry Duncan conducted the Bank’s business every week.

A man of many talents The Museum also illustrates the remarkable life and achievements of the Revd Dr Henry Duncan (1774–1846), ‘Father’ of the savings bank movement. 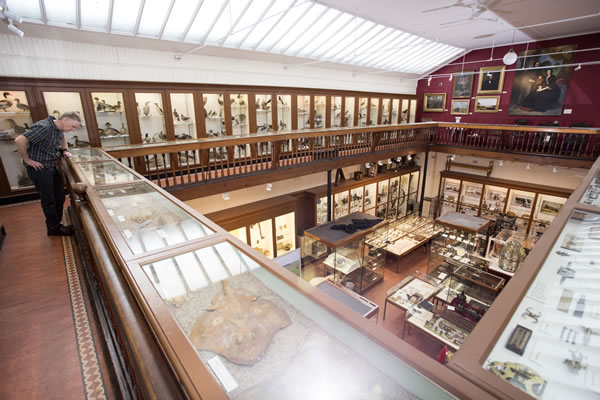 The Stewartry Museum was founded in 1879, and first occupied part of the Kirkcudbright Town Hall. As the collection grew, the present purpose-built museum was planned and opened in 1893. The Museum has an old-world charm and exhibits a wealth of objects relating to the area known as The Stewartry, or Kirkcudbrightshire. The Stewartry Museum holds an impressive local history library and archive collection relating to the Stewartry and an extensive photographic archive. A temporary exhibitions programme and a selection of children’s trails run throughout the year. Special event days take place during the holidays. 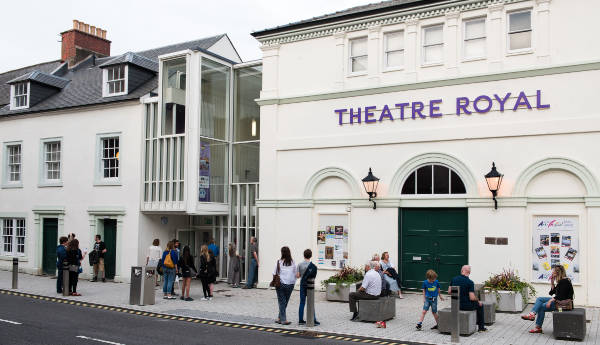 The oldest theatre in Scotland, the Theatre Royal is in the heart of Dumfries and first opened its doors in 1792. It has strong associations with the renowned Scottish poet Robert Burns, who wrote several pieces specifically for its stage.

The Theatre saw multiple changes of ownership during the first half the of 20th Century, before being bought by the Guild of Players in 1959.

The Guild managed to secure support from new sources and instead of planning on building new facilities upwards, they looked towards expanding outwards. Adjacent buildings were purchased, and renovation work began in 2014, completed by the end of 2015. The newly refurbished building includes several new spaces while maintaining many of the historic features, ushering Scotland’s oldest theatre into the 21st Century. 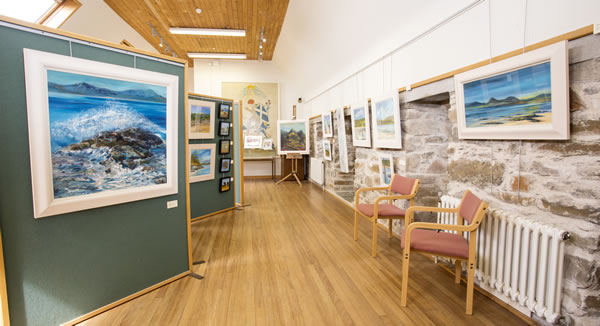 Kirkcudbright’s 17th century tolbooth served previously as the Town Council offices, Burgh and Sheriff Courts and the criminal and debtors’ prison. One of its most famous prisoners was John Paul Jones, hero of the American Navy. 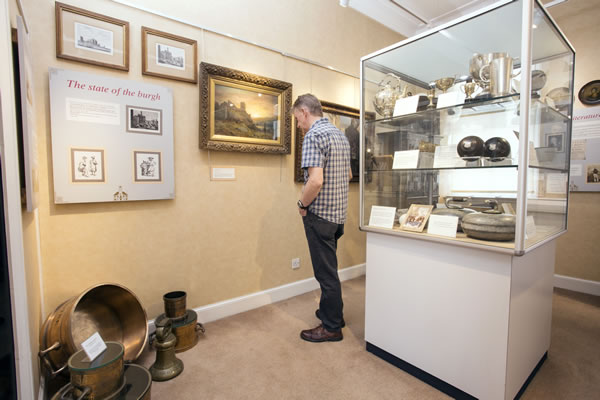 Discover Sanquhar’s world famous knitting tradition and the story of the mines and miners of Sanquhar and Kirkconnel. What was it like to be a prisoner in Sanquhar jail? How did the ordinary people of Upper Nithsdale live and work in times past? All this and more can be found in the town’s fine 18th century tolbooth. A free audio-visual presentation and museum trail take you on a tour, revealing the fascinating story of Upper Nithsdale. Test your skills of observation with a series of weekly quizzes throughout the summer school holidays. Suitable for all ages. 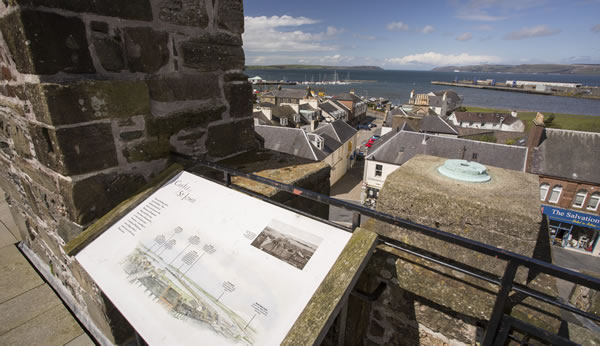 The Castle of St John, Stranraer

The Castle of St. John is a medieval tower house in the centre of Stranraer. It was built around 1500 by the Adairs of Kilhilt, one of the most powerful families in Wigtownshire. Over the centuries the Castle has been used as a home, a local court, a military garrison and a prison. Find out about the medieval landowners who built and lived in the Castle, the government troops who used the Castle as their headquarters during the Killing Times in the 1680s and the criminals and debtors imprisoned in the Castle during the 19th century. 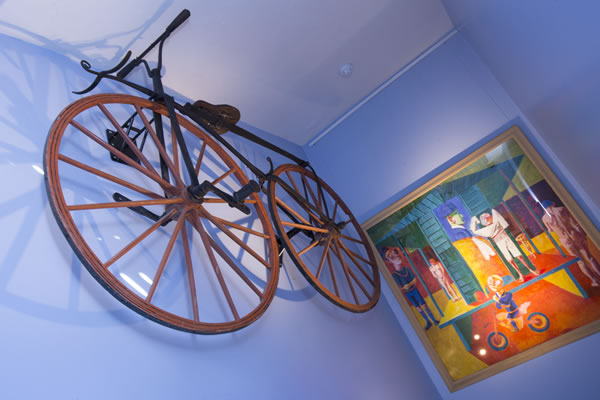 Stranraer’s historic Old Town Hall, built in 1776, is the home of Stranraer Museum. Step inside and discover Wigtownshire’s fascinating past. See one of Scotland’s oldest ploughs, look at Victorian Wigtownshire in 3D photographs and investigate the collection through our museum trails. Plus displays on archaeology, local history, farming and dairying. An exciting and varied temporary exhibition programme runs throughout the year and there are activities for all the family. 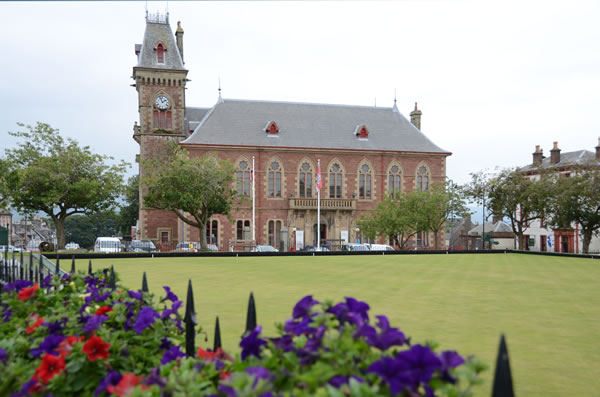 The County Buildings were constructed in 1862 in flamboyant French gothic style as the administrative centre for the former county of Wigtownshire. The Buildings were renovated a few years ago and are now used for a variety of community-related activities including the town library, a wildlife interpretation room and a small museum. The Wigtown museum tells the story of the Burgh and various items of Wigtown memorabilia are on display. The most important group of objects is a collection of bronze weights and measures acquired by the Burgh in 1707; this is the most complete set of early 18th century town weights in Scotland. On the ground floor of the County Buildings are the remains of an 18th century prison cell known locally as ‘The Martyrs Cell’ because of its supposed association with the Wigtown Martyrs. The cell is open to visitors.

Whithorn is the site where the earliest evidence of Christian settlement, practice and worship has been found in Scotland. The Whithorn Trust runs the archaeological site, which includes a permanent exhibition showing the different peoples who occupied the site over 1500 years, temporary exhibitions including items from National Museums Scotland each year, a Museum (in partnership with Historic Environment Scotland) of early mediaeval carved Christian stones, and the ruins of the Priory and its crypts. In addition, there is a full-scale Iron Age roundhouse, based on archaeological excavations from 2013-2019, yielding evidence from a settlement nearby and dated to approximately 450BC; the roundhouse is accessible through guided tours at regular intervals throughout the day.

The site is open from March 31st (or Easter if earlier) to October 31st each year; tickets include all parts of the site and are valid for one year. The Trust has a coffee shop which serves light lunches and home baking made on the premises and a shop which sells local crafts.